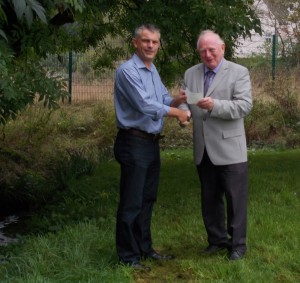 He said “If Southwell is to be repeatedly threatened with flooding then that inevitably will affect its character. To preserve the town means protecting it from threats such as further flooding.

The cheque presentation took place in Minster Fields, near to the Potwell Dyke which broke its banks when Southwell was seriously flooded in July 2013.

Hundreds of homes and businesses were flooded when two months-worth of rain fell in the town in just 30 minutes.

Many people were unable to return to their homes for several months.

Southwell Flood Forum was founded following the incident to try to find a solution to the issues that led to the flooding.

The Forum is working alongside other agencies to implement flood mitigation measures. 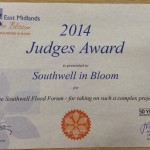 Being impressed with many areas of horticultural interest, the judges of East Midlands in Bloom 2014 awarded Southwell in Bloom with a Silver in the medium town category. A Judges Award was also presented to Southwell Flood Forum “for taking on such a complex project” because one of the entries for work volunteers do within… END_OF_DOCUMENT_TOKEN_TO_BE_REPLACED 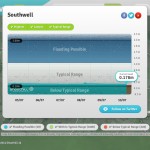 Thank you to those who attended the Southwell Flood Forum Flood Warden and Road Closure Warden training event yesterday at Southwell Fire Station. The training event was an overwhelming success with members of the local community attending. The Emergency Planning team will be able to use the feedback provided at the session in the operational and strategic… END_OF_DOCUMENT_TOKEN_TO_BE_REPLACED

On 12 March 2012, Environment Agency officers attended an incident on the Potwell Dyke watercourse in Southwell, Nottinghamshire. The incident was reported by Severn Trent Water who said that water pollution had discharged into the watercourse from their combined sewer outfall.

Find out more about Community Resilience, and sign-up as a Street Rep at our Drop-in evening on Wednesday 18th June, in Southwell Library. Street Reps will be a key strength in supporting the Community Emergency Plan to help prepare ourselves and our neighbours for an emergency in our immediate vicinity. Street Reps will be allocated… END_OF_DOCUMENT_TOKEN_TO_BE_REPLACED

A dyke might be created on a Southwell playing field to prevent homes from flooding. The town’s flood forum has drawn up the plan for Harvey’s Field. It would involve reducing the level of the field so it could act as a balancing pond in the event of Potwell Dyke flooding. Read more

While wildlife trusts and nature reserves are keeping an eye on the weather, so are the campaigners of Southwell Flood Forum. Their homes were damaged by last summer’s flash floods and now the forum –formed last August to reduce flooding risks – is stepping up its campaign. View article… 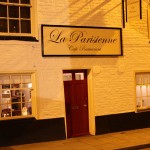 It’s hard to believe that building work is still being considered here when the area was so badly flooded in July. There was evidence of flooding 60 metres into the field. The footbridge at the NW corner was ripped from its anchoring and lifted 4 feet or more into the air. SFF had been given… END_OF_DOCUMENT_TOKEN_TO_BE_REPLACED