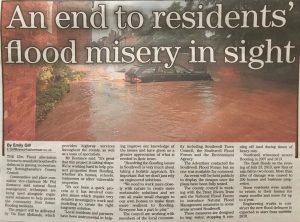 A futuristic view of flooding proofing urban environments They call it “pave, pipe, and pump”: the mentality that has dominated urban development for over a century. Along with the explosion of the motorcar in the early 20th century came paved surfaces. Rainwater – instead of being sucked up by plants, evaporating, or filtering through the… END_OF_DOCUMENT_TOKEN_TO_BE_REPLACED

Through coordinating the Lost Effra Project, a south London based initiative with community involvement in creating SuDS at its heart, it is easy to see the many benefits that involving local people in creating grassroots SuDS can bring. Read more