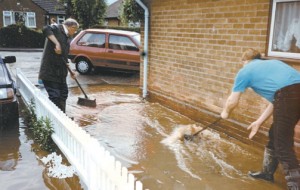 RESIDENTS of a Southwell street affected by the recent flooding believe Severn Trent could have prevented the problems.

Houses on Leeway Road have flooded at least 15 times in the last 20 years.

People living there say Severn Trent started work on the drains more than ten years ago to prevent their homes flooding again.

Mr Eddie Grey said in 1993 Severn Trent started work to provide drains from the road to the River Greet but the work was never finished.

“I first told Severn Trent about the prob- lem in 1983 and I have letters dating back to then,” he said.

“We want them to come and finish what they started. If they did I’m sure we wouldn’t have a problem.”

The June floods affected 12 homes on Leeway Road. Although most escaped serious damage gardens were filled with dirty water which entered some houses.