RESIDENTS in the Southwell area have started picking up the pieces after last week’s floods wreaked havoc in the town. 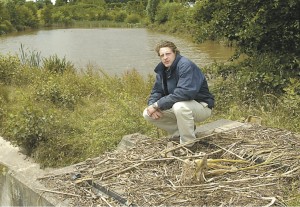 The general manager of Norwood Gardens, Southwell, Mr Henry Starkey, at the highest point flood water reached as it channelled into a balancing pond built to soak up excess water.

Things could have been far worse had it not been for a pond constructed at Norwood Gardens to soak up excess water.

The balancing pond was installed by Sir John Starkey, the owner of Norwood Gardens, in 1996.

He agreed to install it when he sold land for housing development to ensure that water from the Halam Road catch- ment area was channelled directly into the pond.

The general manager at Norwood Gardens, Mr Henry Starkey, said the pond prevented a lot of flooding in the town.

“That whole system has effectively saved Southwell,” he claimed.

The rain water was diverted by a culvert laid across Halam Road with an inlet pipe installed to take water into the pond.

Mr Starkey said had the pond not been in place most of the water would have ended up in new build houses off Halam Road.