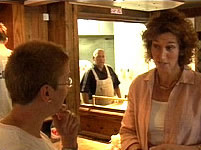 People in Nottinghamshire who suffered during July’s floods have been assured they have not been forgotten.

Gillian Merron, minister for the East Midlands, visited some of the affected areas to listen to residents.

She saw the damage at Southwell racecourse and toured the village of Lowdham where dozens of homes were hit.

Residents told her they wanted not just help to repair the damage but also take action to make sure the area is not so badly affected again.

Southwell racecourse was swamped at the end of June.