Volunteers who have been clearing a dyke say a wildlife haven could be created in a previously neglected area. 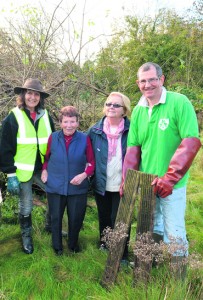 A team of volunteers worked with Southwell Flood Forum at a section of Potwell Dyke behind Coghill Court sheltered housing, off Westgate.

They were served refreshments by the elderly residents, some in their 90s, who were determined to do their bit to help.

Volunteers have put in 550 hours of work to clear the dyke to try to prevent a repeat of the summer’s serious flooding.

About ten tonnes of rubble and debris has been cleared.

Liz Walker, of the flood forum’s watercourse clearing team, said: “One of the residents was saying how there used to be allotments before it got neglected.

“We think this area presents a good opportunity to create a green corridor in the town for the environment and ecology.

“There could be wildflowers and native plants. We have seen kingfishers and crayfish.

“It would also give the residents something nice to look at, and give them the chance to appreciate the wildlife.”

She said experts from Nottingham Trent University’s Brackenhurst campus could be called in to help identify wildlife.

Although Coghill Court did not flood when the dyke burst its banks, water did cover the land immediately behind it.

Among the rubble pulled out was decking that had collapsed upstream and been washed down, clogging the dyke.

Liz said: “We have been workaholics to clear the dyke up to Halloughton Road. It gives the residents a bit of reassurance and they wanted to do something to help, so made us tea and coffee because it’s thirsty work.”