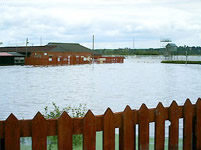 Full-scale horse racing has returned to a Nottinghamshire racecourse for the first time since the summer floods.

Southwell was left under four feet (1.2m) of water in June when a nearby river burst its banks.

Repairs to the course and buildings have cost about £4m and managers admitted there was still a lot to be done on the grandstand.

Work had taken so long, they explained, because the buildings had taken four months to dry out.

Southwell’s general manager Nathan Corden added there had also been a lot of work to make sure the flooding did not reoccur.

“The Environment Agency has assured us it was a one in 75 year occurrence, that it was the result of a freak summer,” he said.

“They are carrying out a study on the river and they will have the findings of that in April/May.

“They are going to share the details of that with us and then we will sit down and see if anything needs to be done.”