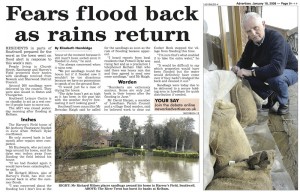 Residents in parts of Southwell prepared for the worst as the town went on flood alert in response to this week’s rain.

Around 200 sandbags were delivered by the council. They were also issued in Oxton and Thurgarton.

Southwell Leisure Centre is on standby to act as a rest centre if people have to move out.

The A617 was closed yesterday morning after flooding at Kelham.

He only moved back in last month after repairs were completed.

Mr Hustwayte, who put sandbags around his home, said the dyke was inches away from flooding the field behind his house.

“If we had flooded again it would have been catastrophic,” he said.

Mr Richard Milnes, also of Harvey’s Field, has still not moved back in after the summer floods.

“I was concerned about the flooding but I don’t live at the house at the moment because it still hasn’t been sorted since it flooded in June,” he said.

We put sandbags round the house but if it flooded now it wouldn’t be too disastrous because we have no possessions to speak of on the ground floor.

It would just be a case of drying the house.

The dyke hasn’t got as high as it has been in the past but with the weather they’re forecasting it isn’t looking good.”

View full article in the Newark Advertiser or download here…